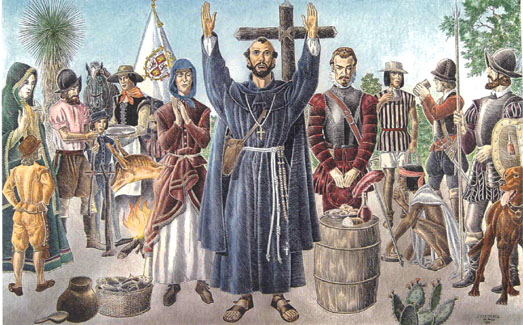 The First Thanksgiving The Pilgrims Missed It

The First Thanksgiving Was Catholic

The Spanish settlers gave thanks for reaching a new homeland just before crossing over to settle what is now New Mexico, Arizona, Eastern California, Southern Nevada, Western Texas, Western Oklahoma and Southwestern Kansas. We honor the men and women who have served as role models for others and exemplified in a positive manner the attributes of New Mexico’s Hispanic culture. Like Don Juan de Oñate and Doña Eufemia, the honorees must be committed to the promotion and preservation of the New Mexican Hispanic culture and history and must have demonstrated an unselfish act or personal risk to further the Hispanic Culture.

His courage: in fording the Rio de las Conchas. The waters were so swift and the soundings showed such a depth that there were none who would dare attempt its passage. Many were for not attempting it, fearful lest they be engulfed in its turbulent waters and perish.
Our general then, like Julius Caesar who it is said rode and tamed the wildest steeds with neither bit nor rein, leaped upon a – fearless horse of terrible and fearful mettle- and knowing that no words can be as eloquent or effective as a personal example, rode before the men and cried:

“ Come, noble soldiers, knights of Christ, here is presented the first opportunity for you to show your mettle and courage and to prove that you are deserving of the glories in store for you.”

So saying, he turned his horse toward the rushing waters and plunged into the roaring waves. Guiding his steed to the opposite bank, he turned rein and once more braved the angry waters, returning to his men. …GilbertoEspinosa a History of NEW MEXICO p.100

In 1598 Don Juan de Oñate and the settlers waited for the King of Spain to grant them permission to travel beyond the northernmost boundaries of New Spain. Almost two years had passed and they were still waiting, scattered over a thirty-mile area. The conditions were intolerable some slept in tents while others slept under the stars,. A year earlier they were eager to enter and settle new lands in the name of the King of Spain. Maybe it was only a dream and the time had come to give up and go home. The camp was on the verge of disintegration. Soldiers were ready to desert! At this point, Doña Eufemia, a lady of distinguished beauty and singular courage and wisdom, the wife of the Royal Ensign Peñalosa, recognized that everyone was exhausted from so much exertion, she called the men together and addressed them:

“Tell me oh noble soldiers, where is that courage which you so professed when you enlisted in this noble cause? Why did you think nothing could resist the might of your arms. You now turn back and ignobly desert? What explanation have you for this conduct if you hold yourselves men? For shame! Such are not the actions of Spaniards! Even though everything else might be lost, there is yet land on the bank of some mighty river where we may raise a great city and thus immortalize our names. To such a place we can go and it is better to halt and rest than to retrace our steps and weave upon ourselves and our posterity a stigma which can never be erased.”

Her words succeeded in exhorting the men to remain in place. Later in Villagrás poetic narrative, Eufemia, her daughter, and 22 other women put on armor and went to the rooftops in San Juan to aid in the defense of the town. Don Juan de Oñate learned of this and was very pleased at this display of valor coming from such valiant female hearts. HISTORIA de la NUEVA MÉXICO, 1610 VLLAGRÁ,  1992 UNM Press – Edited by Miguel Encinias, Alfred Rodríguez, Joseph Sánchez