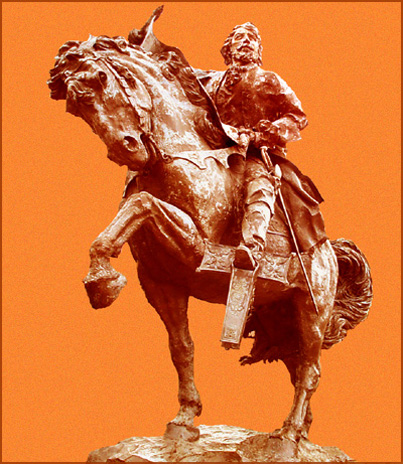 The Founding of Alburquerque PDF

THE FOUNDING OF ALBURQUERQUE

"there is yet land on the bank of some mighty river where we may raise a great city and thus immortalize our names. To such a place we can go and it is better to halt and rest than to retrace our steps... " prophetic words of Doña Eufemia a New Mexico colonist, 1598

THE FOUNDING OF ALBURQUERQUE

In 1692 don Diego de Vargas Zapata y Luján Ponce de Leon, Reconquistador of New Mexico, was appointed by the Spanish King to resettle New Mexico with descendants of the first Spanish settlers of 1598 led by don Juan Perez de Oñate. While on a punitive expedition against the Apaches who were plundering in the province, Governor Diego de Vargas became ill and died at Bernalillo in 1704. This brought to a halt his efforts to re establish the economy and security of New Mexico.

On March 10, 1705 don Francisco Cuervo y Valdez who had been Governor of Nuevo León and Coahuila was chosen as acting Governor to New Mexico. It was this great man that would found the city of Alburquerque.

(I) Don Francisco Cuervo y Valdez, Knight of the Order of Santiago, Governor and Capitan General of this Kingdom and Provinces of New Mexico, and Castellan of his forces and Presidios for His Majesty etc. Certify to His Majesty (whom may God guard for many years), to his Viceroys, Presidents, Governors, and other Officials: That I founded a Villa on the margins and meadows of the Rio del Norte in a goodly place of fields, waters, pasturage, and timber, distant from this Villa of Santa Fe about twenty-two leagues, giving to it as titular Patron the most glorious Apostle of the Indies San Francisco Xavier, calling it and naming it the Villa of Alburquerque in a good site, keeping in mind what is prescribed by His Majesty in his Royal Laws of the Recopilación, Book IV, Title VII, and there are now thirty-five families settled there, comprising 252 persons, large and small. The Church completed, capacious and appropriate, with part of the dwelling for the religious minister, the Royal Houses begun, and the other houses of the settlers finished with their corrals, acequias ditched and running, fields sowed all well arranged and without any expense to the Royal Treasury. And so enjoying this peace and happy time offered by the truces, as well as the experience which I have acquired in this kingdom, wishing that it were more extended, I ordered that one of the best sites of the Rio del Norte be peopled, below the post of Bernalillo and Alameda. This site was inspected by the said general Juan de Ulibarri: sargento mayor, procurador general, and rexidor of this kingdom. He found it to be the most fitting and convenient for the establishment of people and a new villa. Having publicized it, many families of the other jurisdictions offered themselves to go taking at least some large and small cattle. For their security I decided that a group of ten soldiers of this presidio should go in a squad taking their families to escort and guard them, because (the place) is in the main frontier of the barbarous nations of the Chilmos, Jilas, and the Faraones. The command of the troop was given to a commander with full military experience. I do not doubt, very excellent lord, that in a short time this will be the most prosperous Villa for its growth of cattle and abundance of grains, because of its great fertility and for having given it, in spiritual and temporal things, the patron saints that I have chosen, namely the very glorious apostle of the Indies, San Francisco Xavier, and Your Excellency, with whose names the town has been entitled Villa de Alburquerque de San Francisco Xavier del Bosque. The Villa was sworn, taking into account the things ordered by his Majesty in his royal laws of the seventh title, fourth book of the Recompilation. There have been settled thirty-five families and within them two hundred and fifty-two persons. The church has been finished and is quite large. Also part of the dwelling of the religious minister (has been finished) and also the other houses of the inhabitants, with their corrals and irrigation ditches flowing. Everything has been done with good will and to the liking, relief and convenience of the said inhabitants.

This report of Governor Francisco Cuervo y Valdéz was forwarded by the Viceroy of New Spain Francisco Fernández de la Cueva Enriquez, Tenth Duke of Alburquerque, to his attorney Dr. Espinosa for study.

…Your Excellency, since it is evident from the autos, that he has been successful in the government, (his action) can be permitted and orders can be given so that he may be helped with the ornaments and other things of which the royal law grants once to the new towns.
A Junta appointed by the Viceroy considered Dr. Espinosa’s recommendations. The committee reviewed all of Governor Cuervo’s reports of April 1706 along with Fray Juan Alvarez’s letters, and correspondence from the Cabildo of Santa Fe. The Junta made decisions about Cuervo’s founding of the new Villa de San Francisco Xavier de Alburquerque. It was unanimously agreed that the equipment requested for the Albuquerque church be appropriated in accordance with royal precedent. It was in this committee that the order was given to change the name of the new Villa to San Felipe de Alburquerque because of a royal decree ordering that a new población be founded in name of the patron saint of Kings grandfather.  It was unanimously resolved that Francisco Cuervo y Valdéz should be thanked by his Excellency, the Duke of Alburquerque, and he will bear him in mind for promotion, and will represent his great merit and services to the King, as is done by royal decree, that his Excellency would have kept him as Governor if the King had not already appointed José Chacón Medina Salazar y Vilaseñor, the Marqués de la Peñuela.

The career of don Francisco Cuervo y Valdez (b. June 16, 1651- d.1714) was long and successful extending from 1678 to 1712. As a soldier he went from Infantry captain to Captain General; his political career was highlighted by a succession of Governorships; and as an administrator rose to the office of Royal Treasurer of Guadalajara, second in importance and prestige only to that of Ciudad Mexico.

The history of the Villa de San Felipe de Alburquerque

It had been decided in 1698 during the administration of Governor Vargas to establish a city below Bernalillo. Now, that the kingdom was at peace, Governor Cuervo sent general Juan de Ulibarri: sargento mayor, procurador general, and rexidor of this kingdom to inspect an area known as El Bósque Grande de doña Luisa (The Large Grove of doña Luisa also known as “Bosque Grande de San Francisco Xavier”) near the present site of Old Town. This wooded area was named for the widow of Diego de Trujillo, who had built the first estancia in the area about 1632. Juan de Ulibarri found it to be the most fitting and convenient for the establishment of people and a new villa, to make the settlement attractive to colonists, acting Governor Cuervo stationed a detachment of 10 soldiers in the area and awarded land grants to settlers. The soldiers, all of whom brought families, were as follows: Captain don Martín Hurtado, Juan de Piñeda, Francisco García, Pedro Durán y Chávez, Andrés de Montoya, Sebastián de Canseco, Antonio de Silva, José de Salas, Tomás García, Francisco Xavier de Benavides.  Additionally, other families settled in the Albuquerque area; among them were Cristóbal Jaramillo, Juan Barela, Francisco Candelaria, Feliciano Candelaria, Nicolás Lucero, Baltazár Romero, Joaquín Sedillo, Antonio Gutiérrez, Cristóbal Barela, Pedro López y Castillo, Bernardina de Salas y Trujillo, Juana Lopez de Castillo.

Because the (Villa de San Felipe de Alburquerque) is in the main frontier of the barbarous nations of the Chilmos, Jilas, and the Faraones. The command of the troop was given to a commander with full military experience. I do not doubt, very excellent lord, that in a short time this will be the most prosperous Villa for its growth of cattle and abundance of grains, because of its great fertility.

Capitan Martin Hurtado, alcalde mayor and capitan de guerra of the Villa of Alburquerque recounted in a letter of the arrival of an Apache in Albuquerque who told the settlers of a vision that the Indians in the Sandia mountains had, a vision in which they were encouraged to accept Spanish authority and to trade with the Spaniards. The letters also describe the flourishing Apache-Spaniard barter trade going on at the time. He had also been given other news concerning the good state and progress of the said Villa and its inhabitants, and the peaceful visits made by the pagan Indians of the faraon apache nation. (The apaches) have constantly come to trade and barter with the Spanish inhabitants of the said Villa of Alburquerque and the Christian Indians of the mountain passes and towns of this district and jurisdiction.

The Indians of the kingdom and Provinces of New Mexico; governors, caciques, and chiefs of the tribes had a letter written to the Duke of Alburquerque in praise of Cuervo’s services as governor. Cuervo had made treaties of peace with the tribes of the province and mountains of Navajo and Apaches, allowing them to support themselves through trade. The Indians also appreciated his kind treatment of them, and the presents and clothing he gave to them.

Governor Francisco Cuervo y Valdéz in an Order made public at the Pueblo of Taos on August 28th 1705, prohibited all Spanish citizens from residing in Indian Pueblos or even to enter them without express permission from the Governor, and commanding any citizen living in the Pueblos to leave, removing their property.

A letter of the Cabildo of Santa Fe to the Council of the Indies, signed in Santa Fe on February 23, 1706, which praised the services of Governor Francisco Cuervo y Valdéz since his assumption of the governorship March 10,1705. The farsighted policy of Francisco Cuervo y Valdéz in the pacification and resettlement of Indians was given prominent mention by the Cabildo, as well as his salutory economic policies resulting in good harvests of grain. The Cabildo then reported that Cuervo had authorized volunteer families from the province to “go and settle in the great forest of Doña Luisa, located on the banks of the Rio del Norte twenty-two leagues away from this Villa (Santa Fe). General Juan de Ulibarri escorted scattered inhabitants to the site of Santa Maria de Grado, where he gave them “Royal Possession”, and the letter continued with reports on Galisteo and the Villa de Alburquerque, “where its inhabitants have achieved this year the most successful birth of cattle since they entered this Kingdom.”